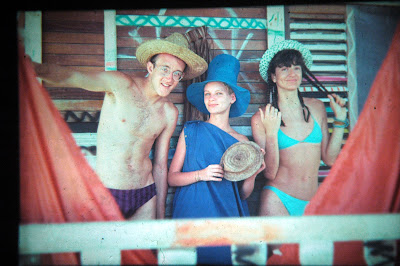 ...Miami-based creatives Oliver and Min Sanchez have direct connections to the exhibition. They witnessed the creative peaks of the East Village scene during the height of hysteria brought upon by the AIDS epidemic.

“The AIDS crisis affected not only the art that came out of the creative community, it affected the community as a whole,” Oliver said. “New York City was a very depressed city.”

Oliver’s older brother Adolfo was an artist. The two moved to New York from Miami in 1980. Oliver met Min soon after and became engrossed in the art surrounding them. They went on to befriend Keith Haring and witnessed history unfold....

Posted by swampthing at 9:06 AM No comments:

Special thanks to Elisa Turner for this article
ARTBURST!

Swampspace presents a dolorous art exhibition that commemorates the one year anniversary of the Champlain South Building Collapse in the Town of Surfside. With heavy hearts and mournful spirit, this installation aims to call upon our collective good will and offer a conciliatory reminder that all life is precious and fleeting. With a debt of gratitude, we honor the First Responders and their dedication to service. 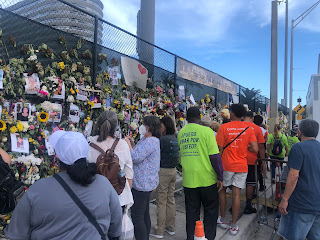 Visitors at the temporary memorial in Surfside 2021 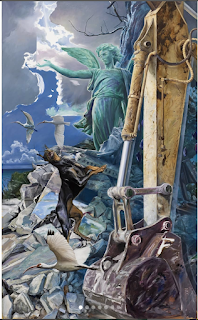 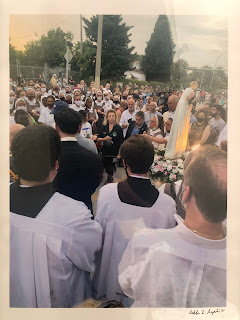 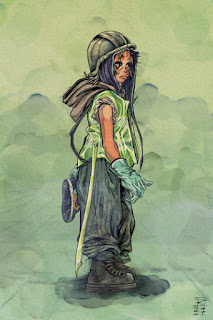 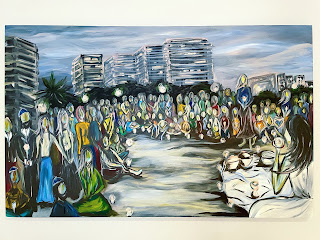 Posted by swampthing at 7:32 AM No comments:

From Zero To Hero

This is the story that won't go away, and that's a good thing. We met Paul and his parents on a sunny day while working at my art studio. Father worked nearby at a local eatery and mom was a home-maker. They had a gentle demeanor as we spoke of the neighborhood and life’s blessings. The kid was respectful and engaging with that sparkle in his eyes that all children have.  My daughter kept that sparkle also but she was now in here twenties having returned home from college. My studio had a big roll-up door that opened to an alleyway where neighbors strolled and cyclists rode to avoid traffic on busy streets. The big door opened to reveal a spacious workshop filled with the makings of a lively atelier where art is born. Adjoining the studio was an art gallery where we had cultural events for the community at large. Having been here for nearly 3 decades made my place a known destination. Many first-time visitors would comment that it was a magical place that invited the curious to explore as it was brimming with color and shape and tools for making stuff. It was also a bohemian messy place, hence the name Swampspace. 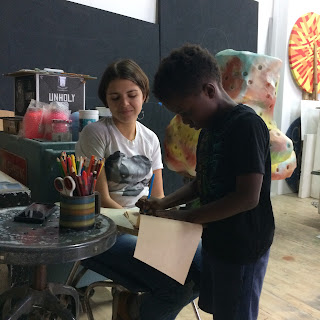 Paul and Lulu Better Days 2019
Paul would visit after school with his parents blessing and on the condition that he would return home by suppertime. They lived just steps away. At times we were too busy working on projects so the kid would just mill around curiously or ask for paper n crayons to draw. Other times we would engage him further with paint and canvas or make sculptures with clay or wood or styrofoam. There was always thoughtful conversation and we were glad to answer all his questions. Paul was fun to have around as he had a charming quality that reminded me of little Opie Taylor from the classic TV show.  It was nostalgic view of a time gone by in America where children were safe to wander and grown and broaden their horizons with the support and protection of a caring society. Then as today it truly does take a village. 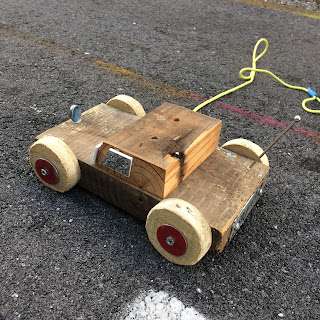 The Paulmobile! an arts & craft project 2019

This innocuous story took a wild and alarming turn for the worse when on a seemingly unremarkable afternoon we were confronted with a malice that can only be explained as a chaotic clash of cosmic vibrations. It was also a test of our social institutions and our collective inability to care for everyone. What I mean by this is that as we must care for all the children, we must also care for adults who are deeply damaged by adversity from a myriad of cultural failings that plague modernity. The details of that fateful day are now the stuff of TV news,  law enforcement and government bureaucracy. The reporting is accurate and the narrative is helpful. For many viewers I was indeed the regular guy, a hero on the perennial feel-good story at the end of every nightly broadcast; cautionary, upbeat and motivational. This was a happy ending that made the world a bit less dreary, a speed bump on the road to hopelessness and nihilism. The offender was a known person, a homeless female with mental illness. I often wonder what her motivations were. It is not a stretch to guess that unscrupulous actors would recruit homeless folks to abduct and hand over a child to a waiting car nearby. On that fateful day, she was marching forcefully with the kid in her grips to a desolate street one block away from the gallery near the on-ramp to I-95. I could not live with that scenario. Rest assured, I would do the same again if needed. 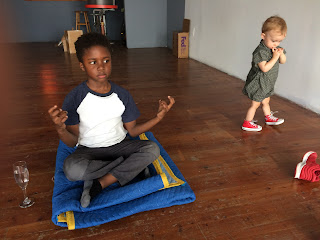 Paul attempting to meditate during the installation of the exhibition CLAIRE Victims of Cancer.

I saw Paul and his parents several times after that. He was enrolled in an organized after-school activity. They have since moved away. The offender was apprehended and placed in psychiatric custody of the state.

Today, I struggle to understand how it is that the growing problem of affordable housing, homelessness and mental health in American is low on the totem of looming concerns such as affordable health care, a crashing economy, climate change or social justice. Perhaps the archipelago of the homeless worldwide just isn’t a pretty picture that a dominant cult of luxury is prepared to appreciate. 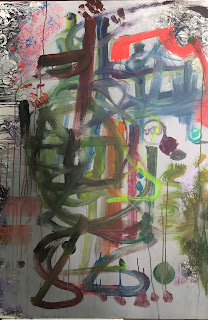 Posted by swampthing at 12:47 PM No comments:

PLEASE JOIN US FOR THE PREMIER SCREENING OF THIS UPLIFTING DOCUMENTARY THAT CHRONICLES THE LIFE OF A DELIGHTFUL YOUNG ARTIST AS SHE NAVIGATES  THESE TIMES OF CONSTERNATION AND UNCERTAINTY. 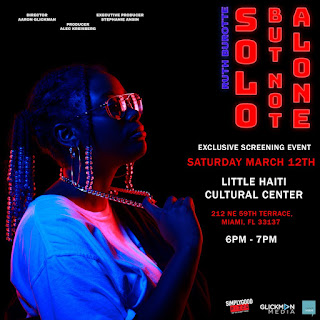 Ruth Burotte is a Haitian American artist from Miami. At just 23 years of age, she is preparing for her first solo show slated to open during Miami Art Week. Her assent is not a surprise to those who know her. Ruth has been receiving accolades since high school. In "Ruth Burotte: SOLO - but not alone", we follow Ruth as she prepares for her show, and meet those who have championed her along the way.
"INEXPLICABLY BANNED FROM THE MIAMI FILM FESTIVAL 2022" FILM CRITIC
READ MORE...
Posted by swampthing at 9:34 AM No comments:

Swampspace Gallery is thrilled to present the recent work of Angela Feyeux.  Angela is a multi-disciplinary artist and arts educator currently focused on the practice of recreational cutting and pasting of printed material fragments from contemporary and vintage magazines as well as coffee table books. Her vision of fantastic improbabilities and imaginary realms is evident in her vivid compositions arranged with surgical precision. The viewer is lured into her fanciful world of analog experience through a myriad of illusionary virtual expressions ranging from the brazenly comical to spiritually transformative. As with Carroll’s Alice and her looking glass, Angela’s work welcomes us into the real world of tactile magic and managed mayhem.

Born in Newark, NJ Angela devoted her professional career to art education of the underserved community in the public school system. After retirement she relocated to Fort Lauderdale, FL where she is an avid candid photographer of street life.

Feyeux earned a Fine Arts Major in Photography from the University of Tampa and attended School of Visual Arts in NY.

“To me, pictures are like blintzes - ya gotta get’em while they’re hot.”  WeeGee

Posted by swampthing at 7:04 AM No comments:

Visit our new website for a comprehensive archive of our swampy history. 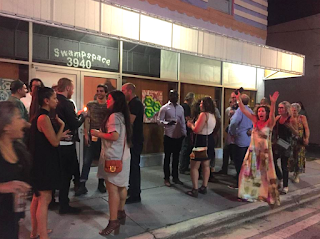 Posted by swampthing at 12:09 PM No comments:

Please join us for our Premier Exhibition during Miami Art Week...

Young Haitian-American artist Ruth Burotte cleverly depicts her superheroes influenced by Japanese Manga and American Hip-Hop making visible a future/present that is both dystopian and joyfully dissociated, to shift the paradigms of art today.

On the occasion of Miami Art Week 2021, Swampspace is thrilled to present new work by Ruth Burotte. In her first solo exhibition, Ruth transports the viewer through prodigious cultural strata with an installation of painting, projection and sound. Heavily influenced by Japanese Manga and American Hip-Hop, she cleverly depicts self-made superheroes wearing masks, capes and kicks, who wield the power to confront diabolical adversity. As a first generation Haitian American artist, Burotte’s work makes visible a future/present that is both dystopian and joyfully dissociated, to shift the paradigms of art.

SPECIAL THANKS TO MIAMI NICHE FOR SUCH A THOROUGH WRITE-UP:
http://www.miaminiche.com/miami-art-week-special-ruth-burotte-solo-not-alone-at-swampspace-gallery/

Posted by swampthing at 9:31 AM No comments: