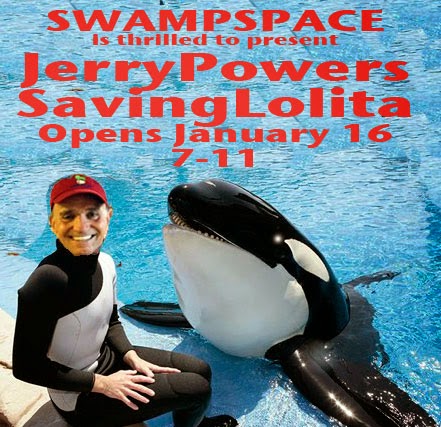 Jerry Powers Opens an Exhibition of Painting at Swampspace Gallery

Swampspace is thilled to present
JERRY POWERS - SAVING LOLITA
Recent Paintings focused on the effort to Save Lolita, a national campaign to improve conditions of whales in captivity.
Opening Reception January 16  7-11
Jerry Powers has drive. His passion for the arts has recently manifest in a series of painting that depict the sentimental and explosive nature of our existence. From the abrasive celebrity mug-shot painting to the innocence of soothing abstractions in primary palettes, Powers is a force for the good and the honest in a world steeped in capital concerns and intellectual inhibition. Powers the artist may be overlooked but the work deserves a spotlight that Swampspace is pleased to ignite.
Powers is no stranger to controversy.  Back in the seventies when Richard Nixon and Anita Bryant flooded Miami with conservative dominance, Powers was publisher of the infamous counter-culture periodical the Daily Planet of Coconut Grove.  Powers was often the focus of authoritarians hell-bent on crushing our First Amendment Right to free speech.  In the 80's he socialized with the New York cultural vanguards such as Alan Ginsberg, Larry Flint, Peter Max and Andy Warhol. On his return for the South Beach renascence of the early 90's, Powers the foreword thinker foretold the tumult of luxury with the founding of Ocean Drive Magazine. In time the glitz and excess depicted on the glossy pages became normalized reality for the Miami Beach we know today.  Always the visionary Jerry has moved beyond the fray of publishing and is now focused on his artwork and a lifelong desire to help animal rights organizations.
Save Lolita is a campaign that strives to educate the public and set policy that protects  wildlife.  Proceeds from sales of Powers artwork will be donated to People for the Ethical Treatment of Animals.

Posted by swampthing at 6:22 AM No comments: