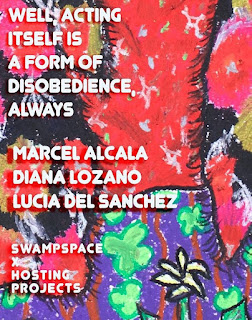 Hosting Projects is an artist run duo, Harris Bauer and Rachel Zaretsky, based in New York and Los Angeles focused on facilitation, curation, collaboration and conversation generated by new works from artists.

Swampspace presents Well, acting itself is a form of disobedience, always, an exhibition organized by Hosting Projects. The show features sculptures, paintings and multimedia works by Marcel Alcala, Diana Lozano and Lucia Del Sanchez, Latinx artists based in Miami and New York.
Alcala, Lozano and Sanchez wield ornamentation and embellishment as a tool in their glorification of excess turned descriptive language. They seek to reclaim existing iconography as well as desired cultural capital. Each of the works on exhibit come from a space reliant on the artists’ collective memory, drawing from their immediate surroundings and personal insight or nostalgia, while still reflecting something outside the realm of recognition. These objects play their own parts to perform their own existences. Each assemblage born in the lingering moment of awareness that camp is, in fact, a criticism.
Alcala’s use of humor, play, and the absurd critique the extremes and everyday banalities of societal power. Their pastel drawings are set in specific landscapes, embellished in a heightened aware- ness of the surreal as they praise the queer body and the brown body. Their images identify and contextualize these figurations in various social and community settings emulous of their everyday life, glimmering with icons of the banal. Their enactment of “clown” performances manifest as both individual works or parties and, similar to Alcala’s paintings, drawings, and poetry, reference identity politics in order to explore the future/status of brown bodies in queer communities as well as various cities around the country.
Lozano’s sculptures blend botanical and synthetic imagery. Her fabrications, as they hang from the ceiling or stand as monumental objects, magnify elements often seen as complementary. She treats these objects in a collage like manner, elevating each component from its original state of recognizability to its fantastical counterpart, an individual artery within each of her compositions. Accessorizing her work with earrings, charms, wax, paint, flowers and leaves, she evokes a peripheral familiarity, calling attention to items often seen within dollar stores and city shops. Her work in further adorning these sculptural objects, normally used in adornment themselves, evokes a desire to belong, perform, and call upon a constructed identity through fashion artifacts and cultural specificity.
Sanchez’s work is consistently reflective of Miami’s socio-political structures and climate dependencies. Born and raised in Miami Beach, she often takes performative action towards immortalizing the city’s various singularities and mannerisms. In this installation of stolen banners, Sanchez embellishes upon imagery that at one point was used to mask developing construction sites for luxury buildings. Sewing, tearing, and revealing sub contexts to these images by way of dried flowers, leaves and shells found on Florida beaches, as well as brightly colored beads and paint, evoke a culture of celebration. Once skins for capitalist visions, they take the form of a newly independent body, pulling away from their previous purpose. They are imbued with sentiment, now part of an emotionally aware landscape. Her treatment of these 20 foot long banners promotes their tactility, rather than their reflection of modernity, and confront notions of excavation, anthropology and desire.


Marcel Alcala (b. 1990 Santa Ana, CA) is a Mexican-American artist who creates events and encounters that upend the expectation of art as a discrete work exhibited for a specific period of time. They often collaborate with artists and specialists in fields such as science, literature, film, music, and architecture. Alcala ventures outside of institutional structures to contextualize their work in public space. Alcala’s diverse practice includes performance, live situations, installations, objects, and drawings. They graduated from The School of the Art Institute of Chicago in 2012, and currently live in Brooklyn, NY.

Diana Lozano (b. 1992 Cali, Colombia) received her BFA from The Cooper Union for the Advancement of Science and Art in 2013. She currently lives and works in Brooklyn. She has shown at The General Consulate of Colombia in New York, Company Gallery, Fisher Parrish Gallery, AMO Studios, La Mama Galleria, Splatterpool Art Space, Casa Prado in Colombia, Guerrero Gallery in San Francisco and Open Space in Baltimore.

Lucia Del Sanchez (b. 1992 Miami, FL) is a Cuban-Slovenian artist. Her artistic practice includes photography, performance, sculpture and painting, drawing from her familial history, migrations through various cities, and her experience as a child model in the early 90s. Her work traces a personal narrative with an eye towards archaeology, collection and observation as well as the fossilization of memory, to produce temporal poetics and protracted self portraits. She graduated from the Cooper Union in NYC, also studying at the Gerrit Rietveld Academie in Holland as well as the European Exchange Academy in Germany. Sanchez currently lives in Miami.

Swampspace is an established artist run exhibition space and studio run by Oliver Sanchez in Miami’s Design District welcoming a show organized by emerging artists with their own practice of curating and roots in Miami. 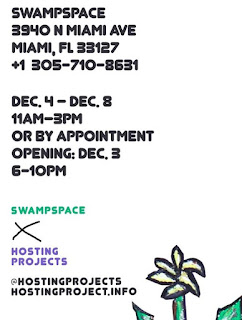 Posted by swampthing at 5:44 AM No comments:

Posted by swampthing at 5:38 AM No comments: