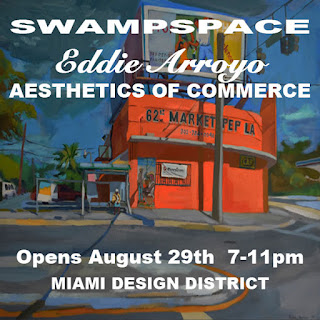 The director of Swampspace announced today the premier debut exhibition of selected works by Eddie Arroyo. Mssr. Arroyo resides in Miami Florida where he is a modest civil servant by day and a quasi-anthropological chronicler of the local art scene by night. He is a fascinating enigmatic mainstay in the dynamic arts awakening that has transformed South Florida from the superficially luxurious to the substantially relevant.  More importantly, Arroyo has undertaken the solitary labor of a weekend painter. With regard to creativity, design, mass culture identity and theoretical discourse, Arroyo conjures sentiments championed by Felix Feneon, french writer of neo-impresionist anarchism.  To position Arroyo within the pantheon of landscape painters such as Edward Hopper, Julio Sanchez and Herve Di Rosa is well within the purview of the argumentative criteria. To share the whimsy of Eddie's natural gift for expression is our humble offering to those supportive of the unvarnished and sophisticated.

And so it is with much enthusiasm that Swampspace presents: 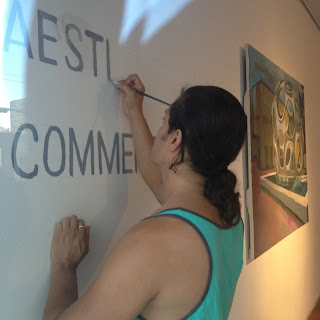 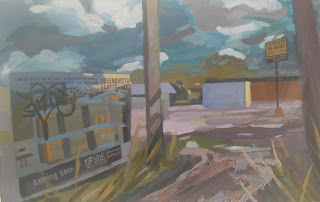 AESTHETICS OF COMMERCE
by Eddie Arroyo

"This series of paintings seeks to explore nuances between the aesthetics of luxury and austerity. We experience the effects of good advertising but the influence on the collective consciousness moves beyond social conditioning. The objective of marketing is to make the consumer feel more acceptable; however, the effect is essentially metaphysical.

Wolfgang Fritz Haug coined the term “commodity aestheticism” deconstructing the relationship between consumer and producer. He also referred to these methods as forms of sorcery. Obviously, Haug uses these
notations in jest but it does speak to the Unexplainable. Why does one feel differently when walking into a Prada store as opposed to the corner market? These constructs are established to house practical items but there is an emotional reaction which is personal and cultural. Visual
specifications are utilized to validate the quality of these commercial businesses through presentations of color and shape. Value is assessed regarding boundaries of class represented in the aesthetics of these structures." Arroyo 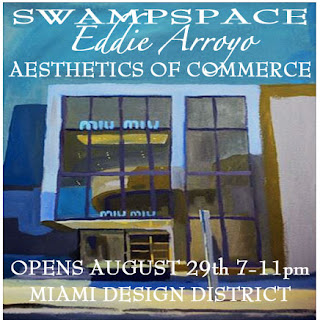 
With fond appreciation for the support from the Knight Foundation and Pabst Blue Ribbon.
Posted by swampthing at 8:30 PM No comments: